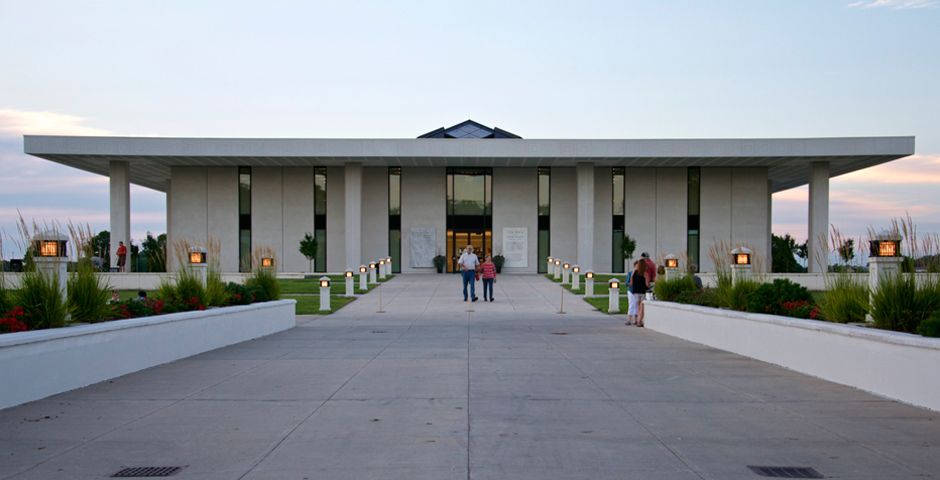 Renowned architect Edward Durell Stone landed on a TWA flight at the Grand Island airport during a raging snowstorm.

Leo Stuhr, a prominent local farmer and former state senator, had recently donated family land for a Hall County museum — although land closer to Interstate 80 was eventually decided on in its place. Unfortunately, Stuhr died after the museum’s first official board meeting leaving Bud Wolbach as chairman. Wolbach and the board asked themselves “Who’s who?” in the world of architecture. In the 1960s, the answer to that question was Edward Durell Stone. The board contacted Stone and asked him to come to Nebraska, suggesting he design the Stuhr Building as his first project in Nebraska.

Stone was given a tour of a snowy Grand Island and central Nebraska. He was particularly fascinated by the Platte River and central pivot irrigation; these things played into his design of the Stuhr Building both inside and out. This was the first building that Stone worked on in Nebraska and the first he worked on with his son, a landscape architect. Stone’s prairie masterpiece has served Stuhr Museum in its original state since opening in 1967.

The Stuhr Building is the visual anchor of the museum’s 200 acre living history experience. The white concrete structure elegantly rises out of the surrounding prairie, a guidepost to the museum which rests at the intersections of US Highways 34 and 281. Ducks, geese and a great blue heron dip their heads into the moat encircling the building to forage for flora while goldfish slurp at the water's surface. Visitors cross a bridge over the water and continue towards large glass doors leading inside. The building’s interior features uninterrupted sight lines and repeats the exterior’s geometry and incorporation of water features.

Following a $7 million capital campaign, the Stuhr Building — dubbed the Gem of the Prairie — was restored in 2014 and 2015, updating mechanical and electrical systems, instalingl climate controls, and returning the interior space to the architect’s original vision for the project.

Stuhr Museum serves as more than a county museum; it is an international attraction. Director Joe Black recently gave a tour of the museum to a group from India. “As I talked to the group I noticed they were somewhat distracted, talking amongst themselves. This isn’t too unusual, but I quickly realized some of the group had made the connection between the US Embassy in New Delhi and the Stuhr Building.” Edward Durell Stone designed both buildings which have a very similar aesthetic.