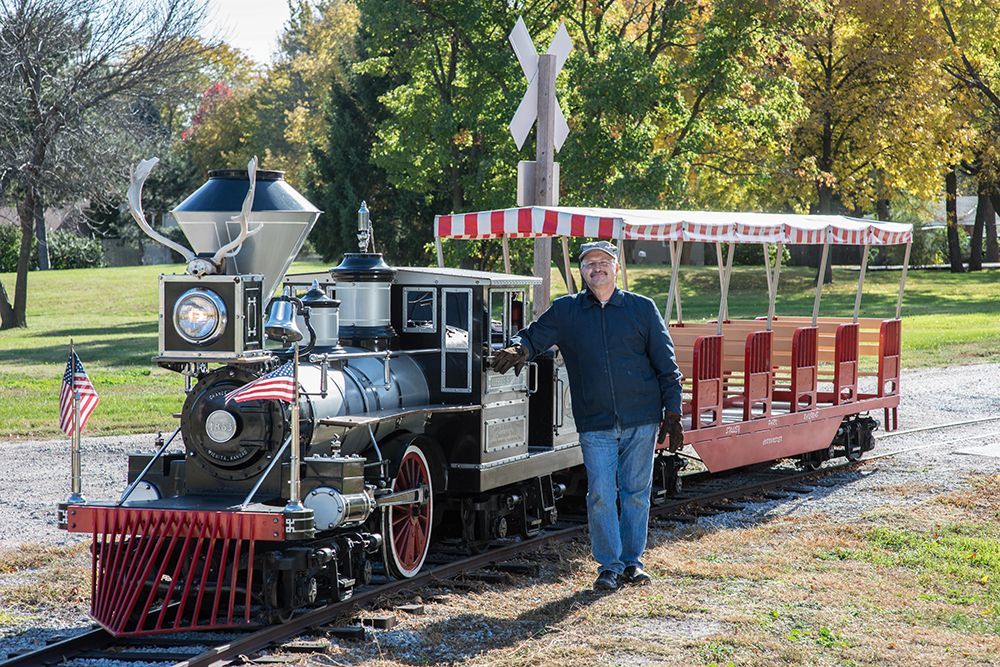 “It’s, it's the Polar Express conductor! It's really him!”

“Mister, can I ask you a question?”

“You betcha, sweetheart. What’s on your mind?”

“Can I ask you another question?”

You know, kids ask questions sometimes that are really hard to answer. And I said, “Yes I do sweetheart, and don’t you ever quit believing. Are you going to come and see me at the train?”

“Well, my mom doesn’t have any money right now.”

“That time of year I always carry extra tickets with me, always. And I gave her and her mother tickets and I said, “If you want to bring a friend, bring a friend too.” And they did, and that little girl’s face was just beaming.
That’s what makes it all worthwhile, that’s what the whole thing is about.”

Railroad man Ken Scholl hears something like this little girl’s exclamation on a regular basis. Scholl manages, engineers, and conducts the Stolley Park Railroad in Grand Island with help from other volunteers, and also bears a remarkable resemblance to the conductor in the well-loved book and film The Polar Express.

Scholl attributes his love of trains to his grandfather, who was a freight conductor. “Any railroad man will tell you that being a railroad man is like having a passion and a fever at the same time,” he says.

“When I met my wife, I told her that I don’t smoke, I don’t do drugs, but I do trains – I’m just warning you!’” Shortly after they were married, he heard Union Pacific #8444’s (now referred to as #844) whistle while outside mowing the lawn. After turning off the mower he went to his wife, who also happened to be outside, and said “We’re going to the tracks.” She asked why, and he replied that the steam locomotive was coming.

His wife was somewhat dumbfounded and replied, “I have been yelling at you for three minutes that supper’s ready, and you couldn’t hear me but you could hear that train whistle?”

She now helps out on the Stolley Park Railroad by selling tickets and running the concession stand.

During Union Pacific’s 150th anniversary tour across Nebraska, which stopped in Grand Island during the Nebraska State Fair, Scholl was asked to volunteer as conductor for the special train. While acting as volunteer conductor, some of the Union Pacific employees couldn’t get one of the train’s cars to “drain.” Scholl happened to know the right sequence of knobs to turn, and was able to step in and drain the car for the modern-day employees who were not familiar with steam trains.

He was honored during a meal on the train by Union Pacific with a photograph and the retirement pin of his grandfather. The following day, he was surprised by being asked to ride in the locomotive and blow the whistle.

After they’d realized his passion and proficiency for their own industry, the railroad asked why he didn’t earn his living working with trains. Scholl replied by saying that if something you love becomes your job, that something becomes a responsibility and tends to not be fun anymore.

Scholl has managed the park’s railroad for 20 years now. He restored the train, which was in poor condition when the park acquired it, along with another person who worked on the motor.

His love for children is immediately evident. He jokes with and encourages the kids at Howard Elementary, where he’s head janitor, doing the same as conductor on the Stolley Park Railroad – emphatically affirming the children with regular “Okey-dokeys!” Every December he reads students The Polar Express in their classrooms.

Parents of newborns regularly ride the train in the evening to put their infants to sleep, he says, thinking about how these moms and dads used to be the children he gave rides to when they were young.

Railroad Man Ken Scholl manages the Stolley Park Railroad in Grand Island, and also bears a remarkable resemblance to the conductor in the well-loved book and film The Polar Express.