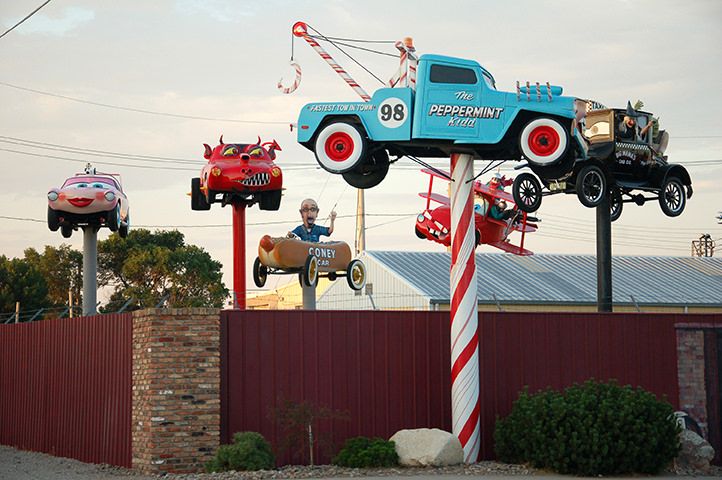 Fred Schritt was born and raised on the east End of Grand Island with eight brothers and sisters — just two blocks from his shop — all of whom stayed in Grand Island. As a young boy he watched daily trains of World War II soldiers stop at the Burlington Station a block from his home. One day, a soldier called him over to the parked passenger train. Fred approached the train, dirty face and frumpy overalls, and the soldier tossed him a nickel and dime. “Go buy yourself some candy,” he commanded.

“I was a panhandler at four years old!” Fred chortles. “Most days I’d wait for the train and end up with twenty-five cents and go buy candy at the grocery store that used to sit right there,” he says pointing to the east end of his G.I. Body Shop lot along the Burlington Northern Santa Fe main line. “I tore the building down years ago.” Like many old prairie towns, Grand Island was once peppered with neighborhood grocers, at one point boasting more than 80 such businesses.

“On most blocks in my neighborhood there was only one car. People walked or shared rides to work; no one had two cars.” Fred dropped out of school when he was 14, not uncommon in the 1940s, and decided he wanted to do body work. Eventually he owned his own shop. “At one point I had 18 people working for me,” he says as he surveys his six-bay building on east Fourth Street.

Fred built some pretty famous cars over the years including the Apple Cart and the Purple People Eater. One year he took a couple of very expensive Lincoln’s to a car show at Stuhr Museum, along with a little cartoon airplane car he’d cobbled together. “Pretty soon everybody was leaning against my Lincoln’s looking at this airplane car, which really wasn’t very well done!”

He turns down as much or more work than he takes on these days, getting along with just a few employees and his daughter. Fred spends most of his time creating his cartoon cars. The sculptures fill the lot where that grocery once stood in between the railroad tracks and his shop. Snoopy, Shrek and a gaggle of funny cars up on poles will soon be joined by Smurfette handing Tweety Bird a bouquet of flowers. Before putting up his next funny car — which is already in the works — he’ll need to get a variance from the city.

The eastern-most room of the shop is a museum to Fred’s motorcycle racing days. “This was my favorite,” he says pointing to a Triumph. “I had 500 starts on
this, won Daytona, Indianapolis, Sturgis.” Later he showed me a video from 1996, winning a heat in Sturgis by half a lap against some of the biggest names in racing.
Triple Trouble crowns the work-bay-turned-museum, a one-of-a-kind creation Fred longs to ride at the Bonneville Salt Flats. “They had to create a class for me,” he says of the three-motor motorcycle. Fred figures it should do 400 miles per hour. His health prevented him from going in 2014, and just as well since the event was canceled because of wet conditions.

More and more people are stopping by Fred’s Flying Circus — so dubbed by his friend who crafted a sign with the saying — to admire his handiwork. Fred looks longingly at the vacant lot across from his current sculpture garden, wondering if he could fill it with funny cars as well. He knows the owner, who is willing to sell the property if Fred wants it someday.

“The day I quit’ll be the day they haul me out of here in a box,” he laughs and turns back to his sculpture.