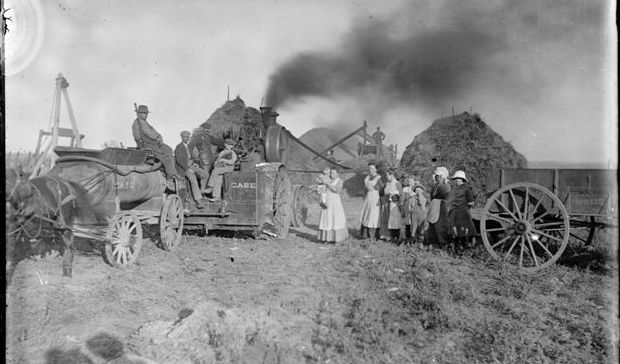 Our city was named for an island on the Platte River, an island in the middle of what was then called “The Great American Desert.”

PAWNEE
Grasslands stretched out to the horizon in every direction surrounding the place that would become Grand Island, Nebraska. These prairies had been populated by the Pawnee Indians for hundreds of years, living in communities of earth lodges while farming – they cultivated 10 varieties of corn – and hunting buffalo. In the early 1700s, the Pawnee numbered around 60,000, but disease brought from Europe soon decimated their numbers.

FRENCH FUR TRAPPERS
Surrounded by an ocean of prairie grasses, La Grand Isle was believed to be coined by French fur trappers in the late 1700s. The island was 40-50 miles long between two channels of the Platte River. It first appeared on maps in the early 1820s, and according to early expeditions was the most notable landmark on these vast, central Nebraska, prairies at the time.

WAGON TRAINS
Beginning in the 1840s, wagon trains rolled by La Grand Isle along the Great Platte River Road. The pioneer spirit laid hold of many in the country, and some 250,000 people streamed along the California Trail between 1840 and 1870 to “better their condition.” The Mormon Trail also traced a path past the island, guiding another 70,000 people to Utah during the same time frame. Contrary to popular portrayals by Hollywood, most of these traveling settlers’ interactions with Native Americans were peaceful – in fact the Indians were known to help the pioneers with difficult tasks such as river crossings.

GERMAN SETTLEMENT
As those wagon trains rolled through the central Nebraska prairies, a group of 35 German-speaking immigrants left Davenport, Iowa, in 1857 and settled near the east end of La Grand Isle. They planned to form a town in advance of the anticipated construction of a transcontinental railroad. This original settlement of log homes struggled with hardships common to pioneers.

HOMESTEADERS
The Homestead Act of 1862 also began to bring settlers to the area with the promise of free land. A lot of homesteading that went on was either speculation or European immigrants who had no way to become landowners in their home countries. Only about half of homesteaders actually made it to the five year mark to earn the title to their land. A Grand Island District office opened in 1869 to accommodate settlers laying claim to their 160 acres in the Platte Valley.

TRANSCONTINENTAL RAILROAD
Following the Railroad Act of 1862, Grand Island was platted in 1866 by the Union Pacific railroad a few miles west of the German settlement. The Pawnee, regarded as a peaceful tribe by the United States government, aided in the construction of the railroad. They fended off Sioux and Cheyenne – neighboring hostile tribes the Pawnee were often required to defend their lands against – raiding parties that regularly harassed the Union Pacific crews. The Transcontinental Railroad was completed in 1869, cementing Grand Island’s identity as a railroad town.

DAMMING THE RIVER
As communities and farms in the Platte Valley thrived, dams were eventually built upstream long the Platte River to prevent seasonal flooding. These dams changed the flow of water in such a way that La Grand Isle is no longer, however other large islands including Mormon Island and Shoemaker Island took its place in the braided river system.

RAIL TRAVEL’S GOLDEN AGE
Around 1871, The Burlington & Missouri River Railroad came to Grand Island. By the 1880s, Union Pacific had constructed a roundhouse and machine shops in Grand Island, as well as provided water to the town from wells along the Platte River.

WORLD WAR II
The city’s population would more than double over the next 50 years to 19,000 in 1940. After the U.S. became involved in World War II, Grand Island become home to an Army airfield, a large ordinance plant, and a German POW camp. The ordinance plant employed more than 4,200 people at its peak, and operated until 1960. The airfield still operates as Grand Island’s airport in 2022.

NIGHT OF THE TWISTERS
On June 3rd of 1980, Grand Island was torn up by seven tornadoes in a span of three hours. This unusual storm destroyed large sections of the northwest and southeast sections of the city, and brought the community together to rebuild.