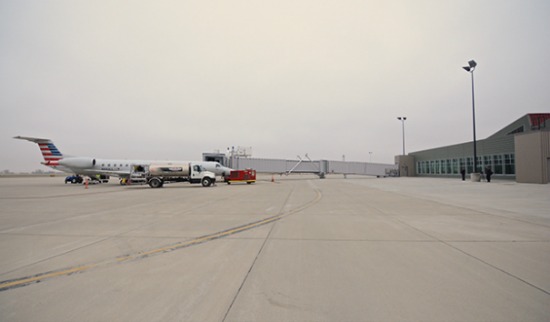 While seats and aisles in airplanes might be getting smaller, the new terminal at the Central Nebraska Regional Airport provides a lot of leg room for passengers. Its 34,000 square feet is three times the size of the airport’s now-retired 1950s terminal.

Rubbing elbows is no longer a necessity in this modern, sustainable facility (if the airport pursued LEED certification, the structure would garner enough points to qualify as a Silver building). Open space is ample, seating plentiful. Charging stations are abundant. Natural light is the standard and heating and cooling is geothermal.

Relatively speaking, however, it is still a small airport terminal. Smaller means shorter lines at the ticket counter and less time spent at the TSA checkpoint — where you now have an awe-inspiring Jorn Olsen mural to admire while shuffling through metal detectors. If you have to run to catch a flight, it’s a very short run from the front door to the new jet bridge.

Unique features of the new terminal include the ability to see from the public area into the secure waiting area. The terminal restaurant can serve both secure and public sides of the building. Like other modern airports, the bathrooms use the latest technology with all-in-one automated sinks. The design of the terrazzo flooring helps direct passengers and mimics the channels of the Platte River. Hall County Airport Authority Director Mike Olsen is particularly proud of the fireplace travelers can warm up next to in cooler months.

Since 2010, numbers keep going up at Central Nebraska Regional Airport. After a notable slump from 2000-2009 — when enplanements failed to cross the 10,000 mark — passengers using the airport have increased more than six fold. Olsen predicts that enplanements will reach 70,000 in 2016 if trends hold.

Other recent improvements to the airport include additional terminal parking and a new general aviation terminal. Future improvements include lengthening the runway to accommodate larger aircraft.

AFTERNOONER’S RESTAURANT
Only a handful of airport restaurants can serve both public and secure sides of an airport, and Afternooner’s in the Central Nebraska Regional Airport is one of them.

Terry Brown opened Afternooner’s in downtown Grand Island 10 years ago. After just one year, she moved the business to the airport. People doubted the sandwich shop would survive at the airport, but Terry has proven them wrong.

This family-run business is now smack dab in the middle of the new GRI terminal. The secure side of the restaurant, adjacent to the waiting area, features unique light fixtures and artwork by Jorn Olsen. A smaller dining area in the public area of the terminal offers views of the same waiting area and the tarmac.

Afternooner’s isn’t just for airline passengers. The local favorite is the Homer, on your choice of bread and piled high with all of their meats and a variety of vegetables. The local Red Hat Ladies lunch monthly at the eatery, and a twice monthly fish fry draws large crowds. “I think people just come because it’s a social event!” Terry said about the fish fry.